Posted by web designer Posted on 03:25 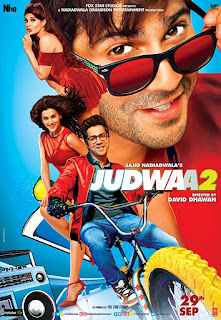 Two brothers (twins) born to a honest businessman are separated at birth when their father exposes a smuggling racket and a king pin. One of the brothers is thought to be dead but only resurfaces stronger after living life on the streets to reunite with his family over a sequence of events and twist of fate. Genetically bound by reflexes both the brother’s lives interlink in strange ways and a comedy of errors. They eventually come together to destroy the smuggling nexus and save their family from a downfall that awaits them.

Judwaa 2 is a family entertainer produced by Sajid Nadiadwala. Co produced by Fox Star Studios, a Nadiadwala Grandson Entertainment Production, is directed by David Dhawan. It stars Varun Dhawan in a double role alongside Jacqueline and Taapsee.