Posted by web designer Posted on 03:29 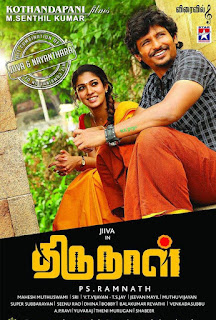 Thirunaal (aka) Thiru Naal is a Tamil action - comedy movie direction by Ramnath, who earlier directed Karanas's Ambasamudram Ambani. Thirunaal movie has Jeeva and Nayantara in the lead roles. Thirunaal movie story about a local rowdy character named Blade (Jiiva), who tries to change himself after falling in love with a kindergarten teacher (Nayanthara).


A.S.P. Pugazhendhi played by Gopinath joined this team and tried to control all the misbehavior around the city. Meanwhile, one of the groups plans to murder Blade Ganesh and police team on another side.