Posted by web designer Posted on 03:42 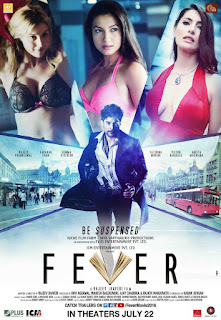 STORY: A man (Rajeev Khandelwal) wakes up in the hospital with sketchy memory of his past life. All he knows is that his name is Armin and he is from Paris. And then, he starts getting visions of a murdered woman. As he tries to put together pieces of this jigsaw puzzle, he meets Kavya (Gauahar Khan), who becomes his confidante. Soon, another murder happens. Is someone trying to frame Armin?

REVIEW: If you've watched Rajeev's earlier film Samrat & Co., Fever will feel familiar. It is just as amateurish and convoluted. It fashions itself as a thriller but is too mind-numbing to make a mark. You'll figure out quite early which way the film is headed, long before Armin makes the revelation.