Posted by web designer Posted on 10:15 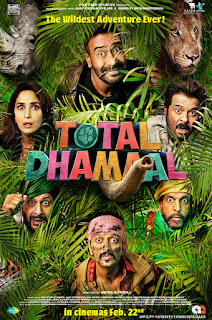 And the madness & the craziness of the biggest franchise of laughter continues… Total Dhamaal is a mad adventure comedy about money. Guddu (Ajay Devgn), a small time crook gets double-crossed by his own colleague, Pintu (Manoj Pahwa), after they have managed to get their hands on an illegal booty. Guddu & his side kick Johnny (Sanjay Misra) manage to trace his colleague but only after Pintu has given the information of the booty to 3 other groups i.e. Avinash (Anil Kapoor) & Bindu (Madhuri Dixit Nene)- a bickering couple about to be divorced. Find out how the story concludes and if they are able to get the booty or not!