Posted by web designer Posted on 05:13 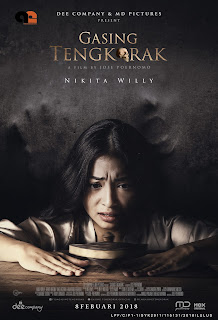 VERONICA (Nikita Willy), is a top diva. In a gig, Veronica suddenly fell unconscious. After getting help Veronica decided to calm herself away from disturbance. MICHAEL, Veronicas manager, gets a place in line with Veronica expectations. A beautiful villa, luxurious, and far from everywhere. After entering the villa, Veronica told Michael to leave her alone. Initially staying in the villa was a pleasure for Veronica. But gradually, the occult disorders began to haunt Veronica, in the form of a SKULL GAME. When the Skull Gasing is spinning, the childs disturbance will be life-threatening to Veronica. Gasing Skull adopted the traditional game in Minang realm.