Posted by web designer Posted on 05:33 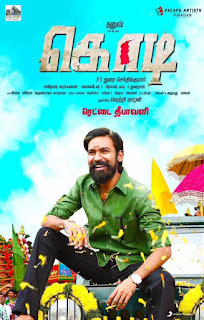 Kodi movie is about the politics in the village based on power plant factory inside the village. Karunas, who wants to become a politician but due his inability  he failed to prove is talent in politics. Karunas burns himself to stop the factory in the village which pollutes the village.

Karunas's sons Kodi and Anbu (dual role played by Dhansuh) elder son Kodi gets into Politics and other into teaching. Kodi fall in love with Rudra (Trisha) who is the most powerful politician in opponent party. The second one Rishi fall in with the egg vendor Malathy played by Anupama. What happens to his love and the factory is rest of the story to be watched on big screen.